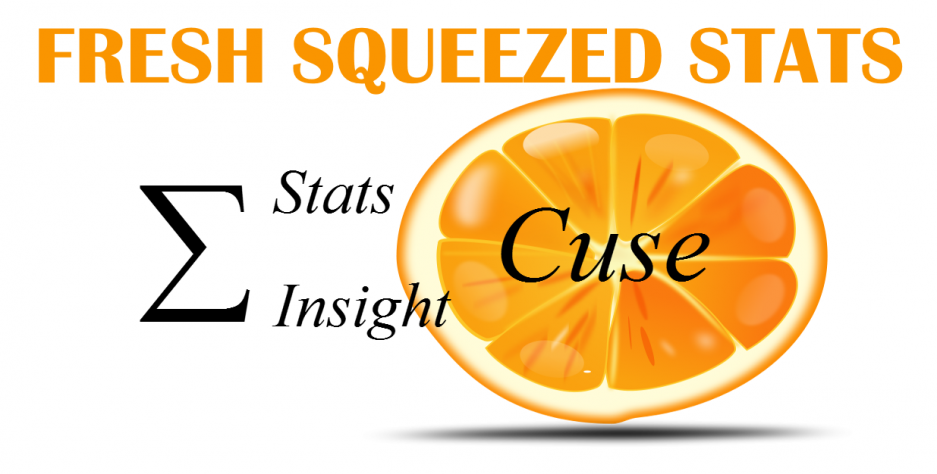 Nowadays analytics and statistics are part of the vernacular teams and even fans use to discuss sports. Finally numbers have been given the attention they deserve, although some (hey Charles Barkley!) are very skeptical. To me, all analytics do is provide data. That’s it. Numbers on a page mean nothing, it’s all about the context and application of those numbers. This article is by no means as sophisticated, statistically speaking, as I’d like but until I get the requisite training to do more advanced work, I’ll do what I can. Hopefully this will be insightful or at least interesting enough to get you thinking about how we can effectively use data from the Combine to help evaluate prospects. Maybe the answer is the entire process is overblown. Maybe the current battery of drills are ineffective at delineating anything significant. Maybe we don’t look for the right attributes. Or maybe, we are given a wealth of data that can be used in some small way to inform our decisions. Maybe.

One challenge evaluators face in analyzing a prospect is how to weigh raw athleticism. Looking at how naturally gifted a prospect is physically might be part of the equation, but it can be a dangerous exercise. A strong armed quarterback, a blazing fast running back or a wide receiver with a freakish vertical all have a quality that can contribute to their success. However, being such visual creatures its almost built into our evolution to be attracted to such flashy elements and overvalue them. The history of drafting, in any sport, is littered with examples of decision makers being enticed by uncommon physical attributes and potentially overlooking other more important factors like intelligence, maturity, feel for the game and even injury risk. JaMarcus Russell was a future star on paper with a rocket arm, prototypical size and impressive athleticism for his powerful build. Anthony Bennett was recently taken #1 overall by the Cleveland Cavaliers because of his untapped athletic potential and high upside. Russell was out of the league just three years into a disastrous start and according to his rookie season win shares Anthony Bennett has been the worst return on investment of the lottery era.

With that conspicuous warning let’s take a look at how we may be able to gauge athletic tools using Combine data. As previously mentioned the numbers mean nothing without context and logical evaluation. To start I developed a few different methods for ranking athleticism. I only included prospects who competed in the drills used at the Combine. Pro day data is not just harder to find and organize but its notoriously more forgiving not to mention times less standardized as it relies on scouts with stopwatches instead of electronic timers. I also used the official 40 time posted not the average of each two unofficial times. There are two main ways to rank prospects given the data. One would be to use a discrete data set where rankings are based on the number of above average drill results rather than considering the actual values and all the variations of a continuous data set. In other words, we can rank prospects based on continuous data where a 4.49 40 time would be different and in this case better than a 4.50. Or we can rank those two players the same since they both ran an above average 40. There are arguments to be made for both, and throughout the article I’ll use a combination of both types. Some scouts will say that scouring the minutiae of exact drill results is a waste of time. Those scouts would say that the athletic attributes needed to play in the NFL fall more into a threshold like continuum where what’s important is if you have “enough” speed to create separation from corners on a go route or “enough” agility to avoid a linebacker in space. The other philosophy is that grading on a continuous scale is more precise and that Phillip Dorsett’s 4.33 40 is noticeably different than the 4.54 run by Da’Ron Brown and that gap needs to be considered. There will be much more to come on these tables but here’s the raw materials for a future discussion.

This table ranks prospects based on the average of their drill result percentile. The only problem with this table is that some drills are more predictive of NFL success than others, but it does a good job of measuring overall athleticism. Most studies ignore the 10 yard split, but I included it to get a more complete picture of athleticism as I feel it indicates a level of explosion and the ability to get going quickly out of a stationary position. In other words what receivers do on most pass routes. The coloring is similar to a “heat map” where the highest value is dark green, middle values are in some form of yellow and the lowest are red.

This table uses the explosive index used by W. Casan Scott in his article on Advanced Football Analytics but here I replace the 40 yard dash time with the 10 yard split. I made the change due to the subjective belief that the shorter distance covered and drastic acceleration used are more indicative of explosive ability.

One interesting thing to note is the #1 ranked prospect, Combine darling Chris Conley, was unreal in the vertical and broad jumps but merely slightly above average in his 10 yard split. Had I used the full 40 his 4.35 would have led to an even more impressive index.

The movement index was this time taken completely from Scott’s aforementioned article. I believe this index is a great indication of raw route running potential. In order to get separation at the NFL level you need speed, agility and elite change of direction ability.

Notice how the #1 ranked player is Amari Cooper, believed by most to be the most polished and effective route runner in the class.

Here I had to be much more subjective than I’d like but was unable to find an alternative. Because small differences in all categories are somewhat negligible I divided the group (and this included all WR Combine participants as everyone who shows up to Indy gets measured) into tiers but did include overall rankings. For Tier 1, I looked for the ideal WR in terms of height, weight, arm length and hand size with all other attributes being equal. For example Darren Waller’s 6’6 frame would be preferred over Phillip Dorsett’s if we are holding speed constant.

Tier 1 would correspond to an ideal frame that allows the prospect to have a distinct size advantage over all defensive backs. This type of receiver could play all across the board including outside and be an instant red zone threat. In short they have elite size. Tier 2 receivers have above average size but are not quite elite. Tier 3 receivers have “plus” size meaning their size is enough to give them an edge over average sized defensive backs but could still line up across DB’s who can matchup to them physically. Tier 4 is your average NFL receiver. Tier 5 would generally pin a prospect to a slot receiving role whereas Tier 6 could potentially mean a prospect is more inclined to be used as a returner man and might struggle even inside at the slot position. There are always exceptions to every rule.

In order to rank prospects in terms of overall physical potential (again using the data available from the Combine) I used the total rank number from the Aggregate Athleticism Rankings and the Body Type where the smaller the total the better. For the overall rankings I had to exclude prospects who did not post results in every category measured.

While Kenny Bell was the highest ranked overall athlete, when size was added into the equation Kevin White and Darren Waller take the cake.

Kevin White looks to be the real deal as he not only produced on the field, but has the measureables to translate to the next level.

Hi there!!! The NFL and NBA drafts are both of great importance but can mystify even veteran scouts and coaches. I will use this space to explore and analyze draft related topics with the goal of being entertaining and insightful. Welcome!